I had an absolute blast assisting Fashion Scout’s blog at this year’s London Fashion Week SS14. Fashion Scout are a platform for emerging designers where they hold many awards such as ‘Ones to Watch’ and ‘Merit Award’ for those they believe will be huge names in the future. I met some really cool people and I have to say the blog is looking amazing…check it out!

Highlights for me have to be the Tabernacle Twins, LULU LIU and Pam Hogg. 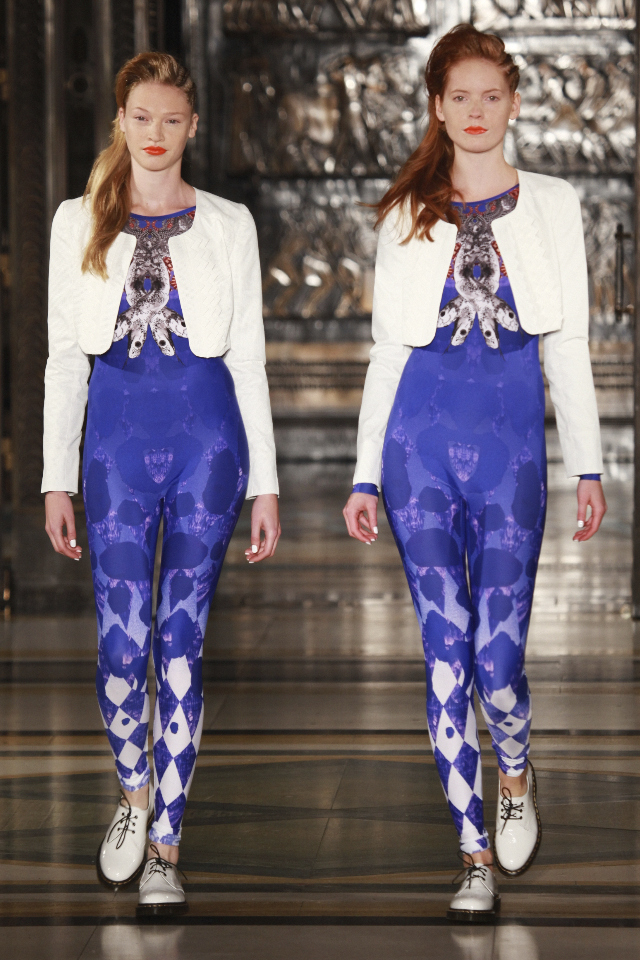 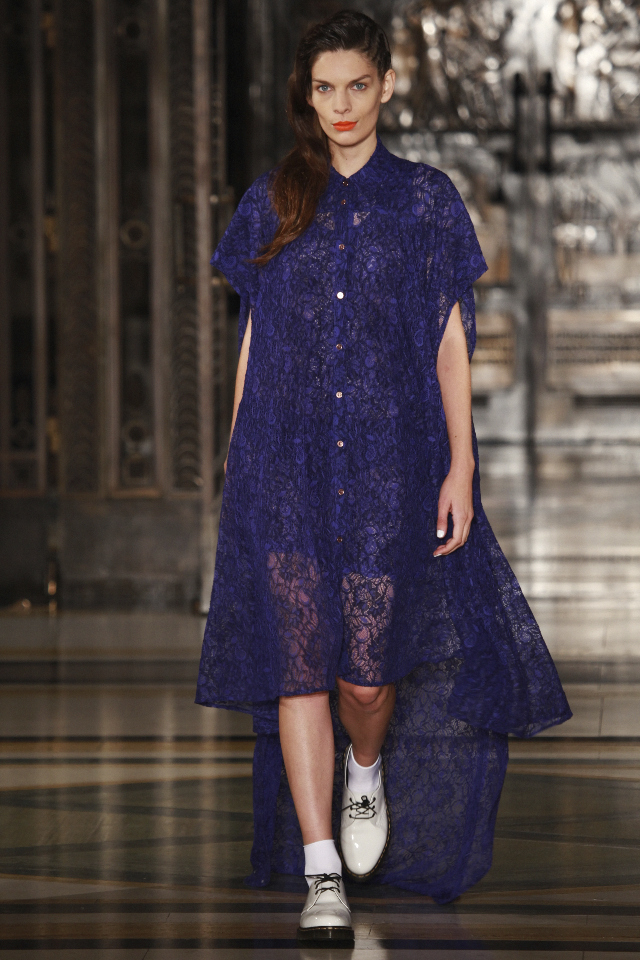 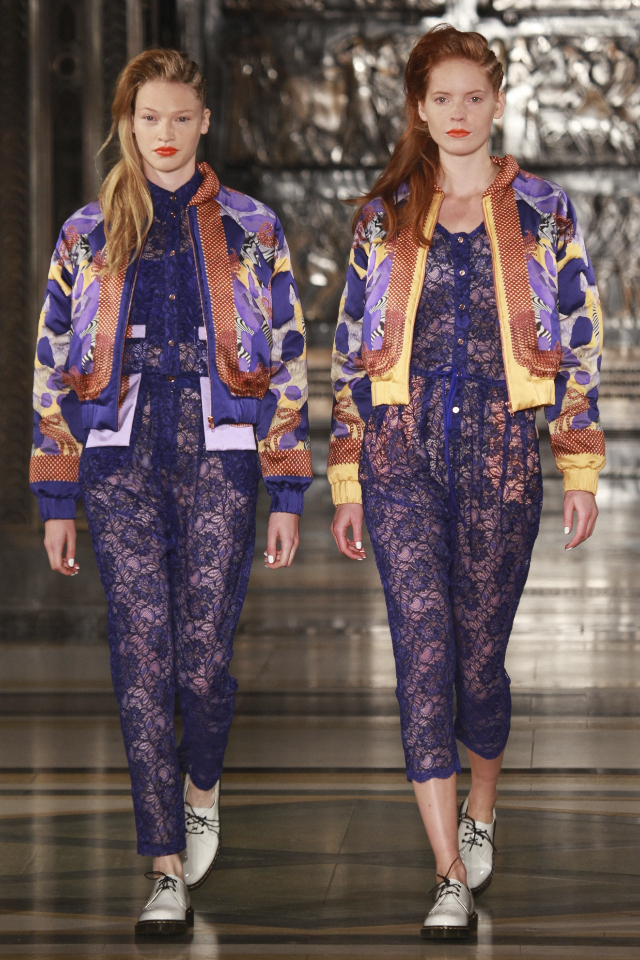 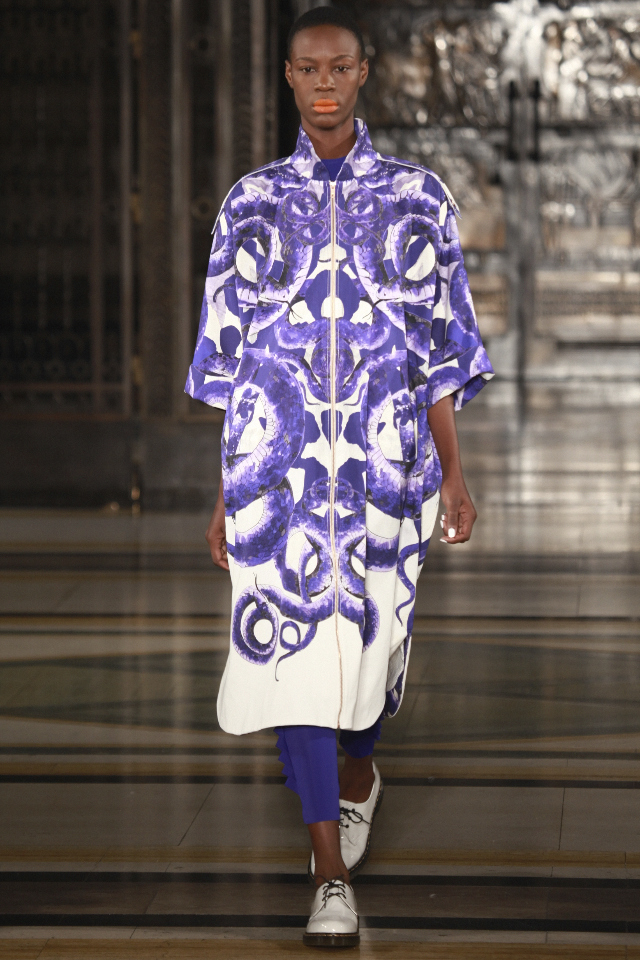 Vibe Lundemark’s label is quirky and playful transporting you to a fantasy land. This is an approach which he bases on the adventures of the fictional ‘twins’. The collection is ready to wear and street style inspired with the psychedelic bomber jackets and jumpsuits covered in cobras. The white combined with sharp purples gave off a really strong edgy look topped off by the Dr. Martens. I could definitely see myself wearing the jumpsuits to a festival…nice and comfortable..not practical for toilet breaks though! Head to toe lace is demonstrated here as a key trend for SS14. 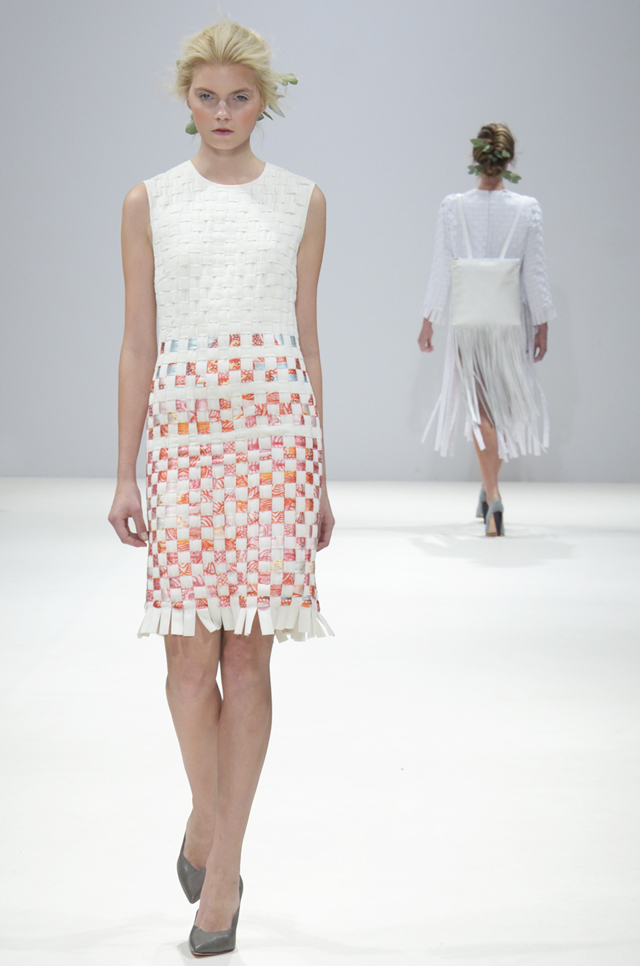 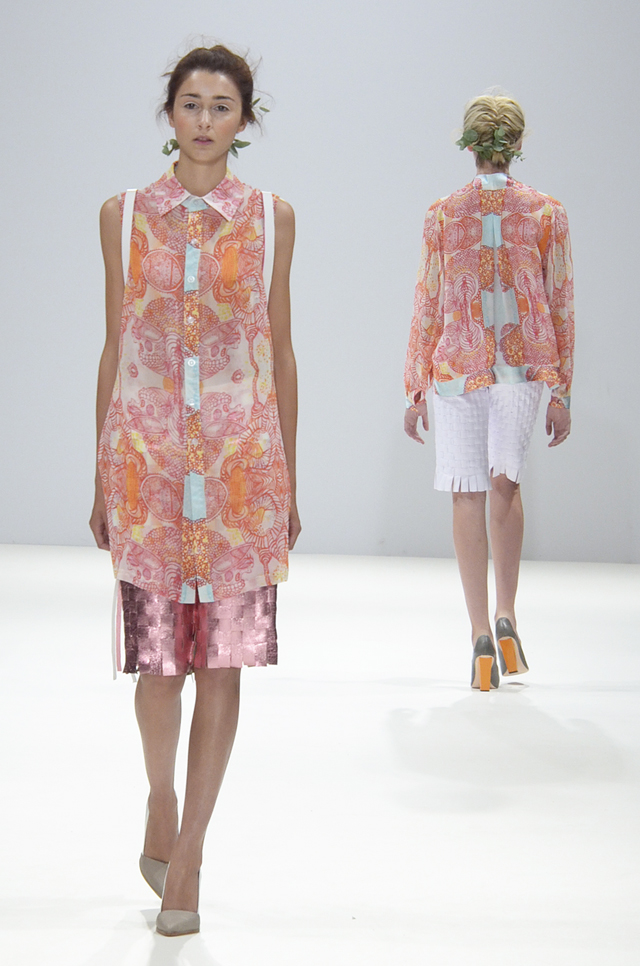 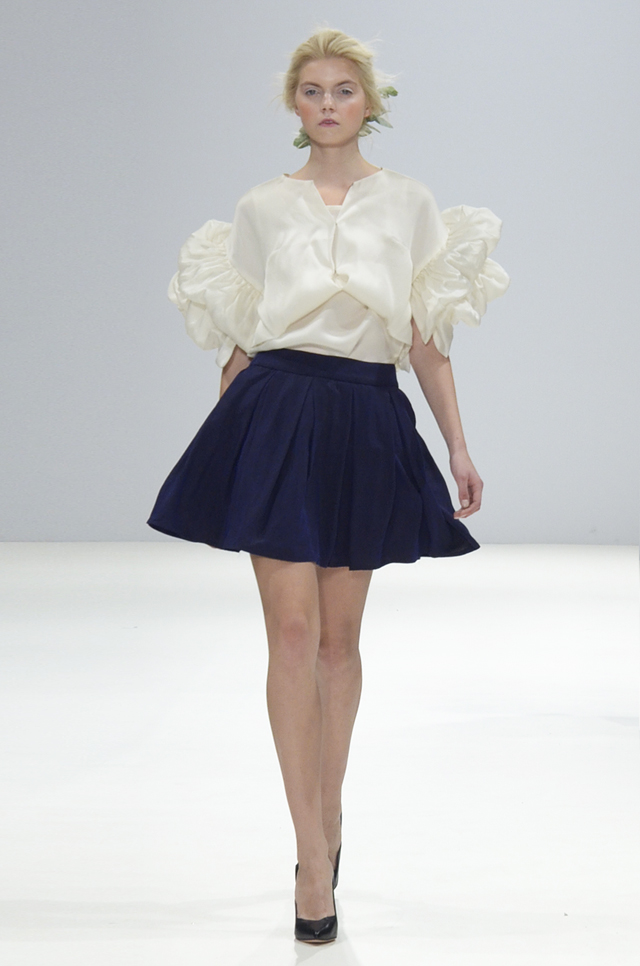 Again taking inspiration from fantasy worlds, Lulu Liu took her inspiration from ‘Yarrow Wando’ a dragonfish conjured up in her own imagination. The Japanese influence is evident in her printed pieces using a colour palette of coral, turquoise and fusia to name a few. The pieces were wearable and along with the make up, fresh and natural. The arms of this last piece does look like it could be part of a fish! I love the volume in her garments, which is signature to her designs. Metallic leather in greens, silver and pink were also seen as a strong component of the designs and accessories. Still on trend for SS14. 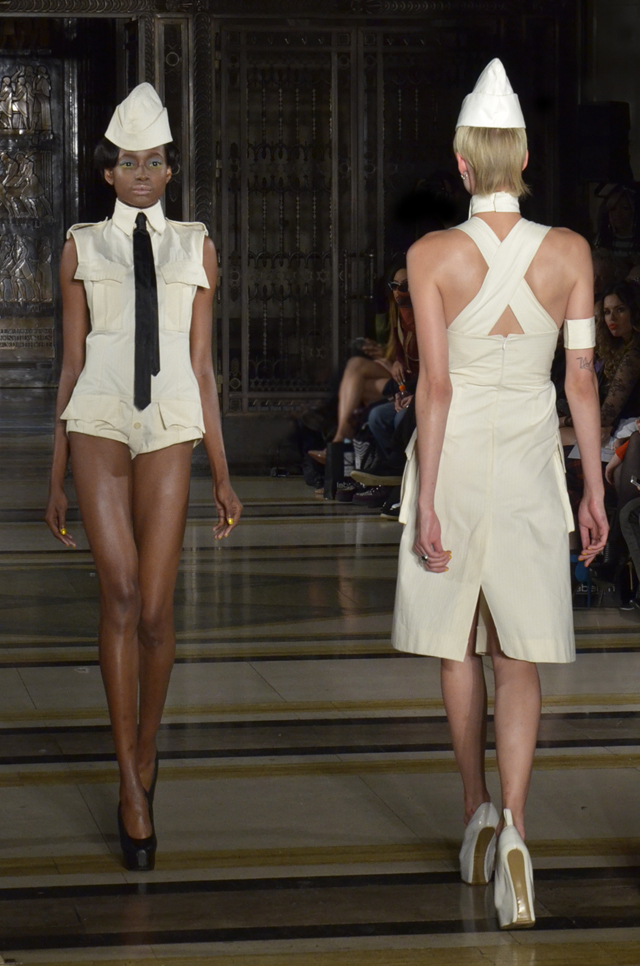 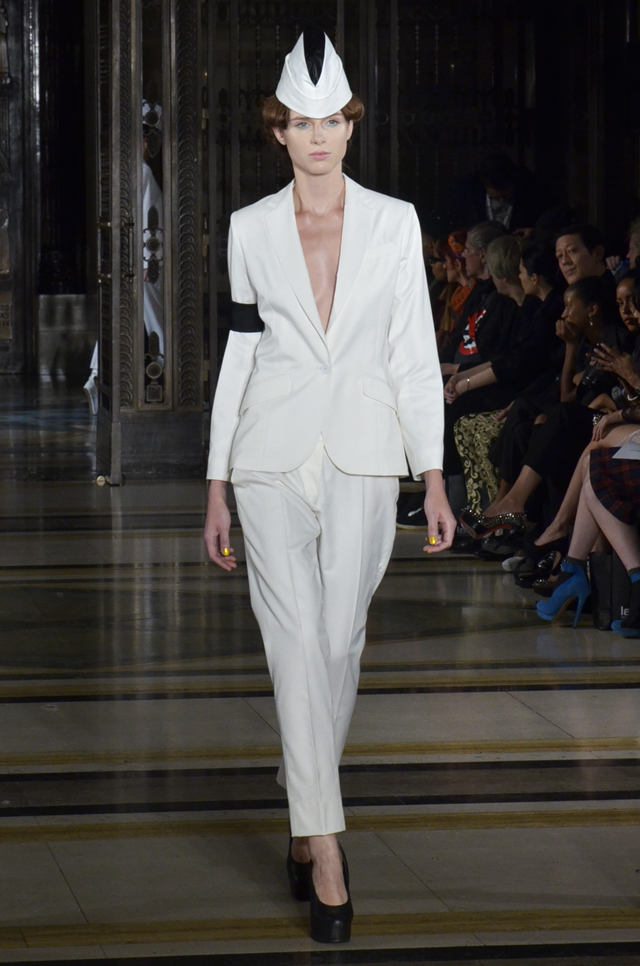 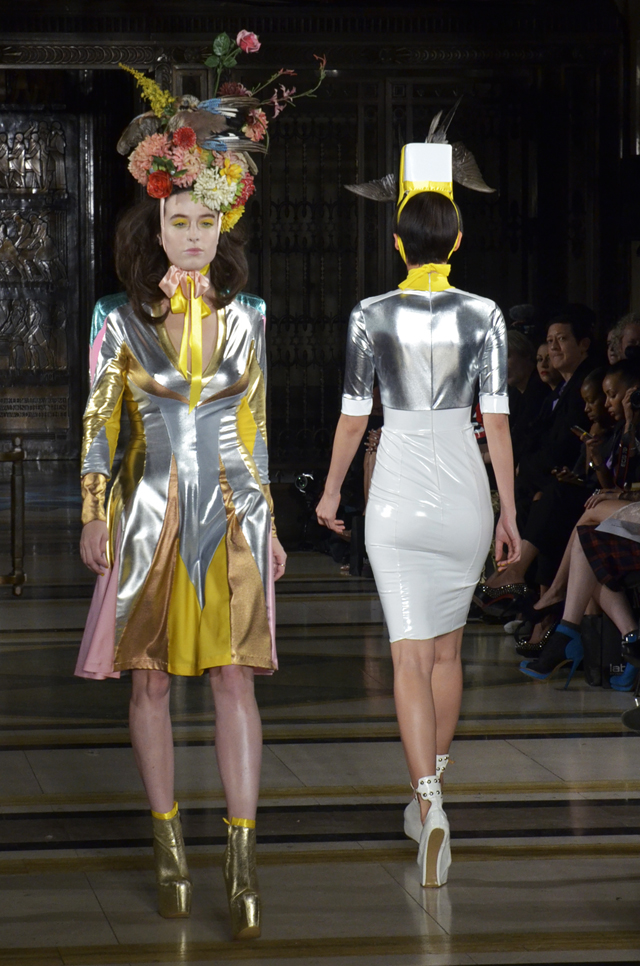 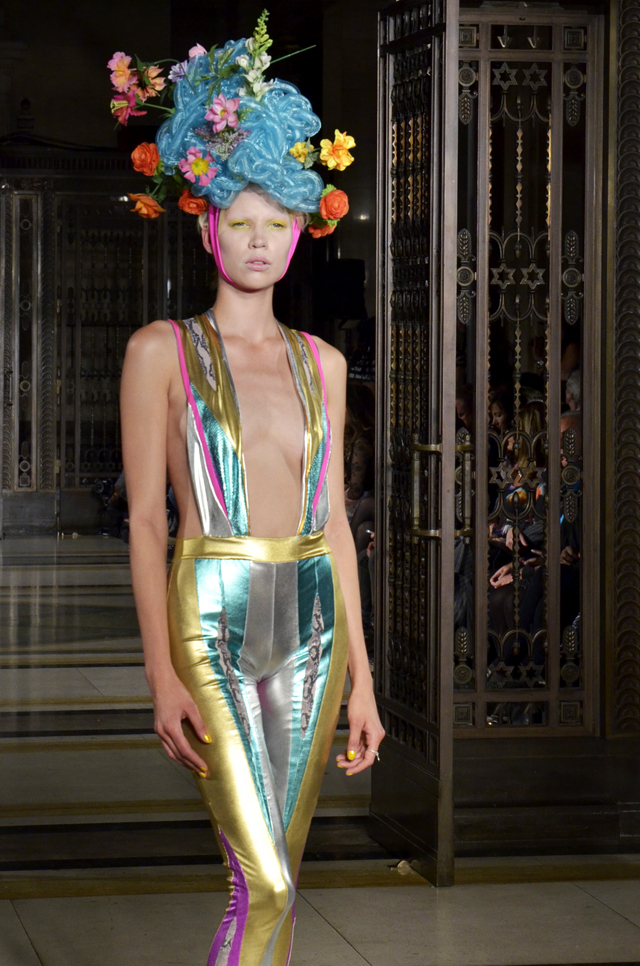 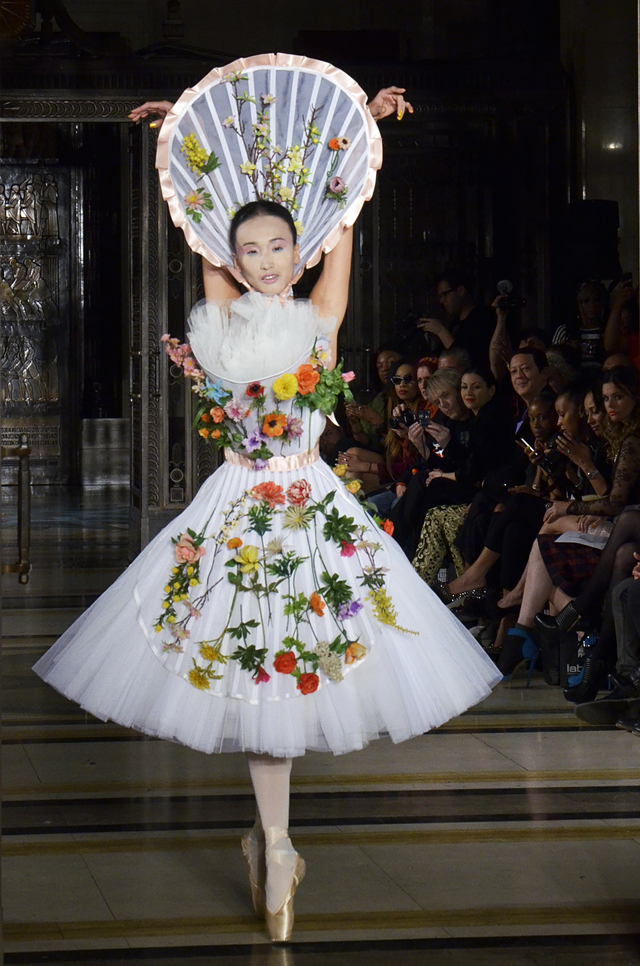 Pam Hogg’s ‘Future Past: War and Peace: Past Future’ collection was reflected by the mixture of military inspired uniform ranging from two piece suits and sexualised jumpsuits. This was contrasted by flowing skirts and bright coloured jumpsuits in PVC, adorned with floral and feathered head pieces. This show, as expected generated a huge buzz and astounded reactions from viewers, to quote DJ Gemma Cairney’s tweet “I don’t even know how to explain how wonderful that show was.” It is clear to see why Pam Hogg has dressed so many rock stars such as Blondie and Siouxsie Sioux as her signature PVC jumpsuits are spectacular. Florals are yet again evident for SS14 however life sized flowers stitched onto the garments giving a 3D appearance.